Riding on the island of Foehr

It seems we are gradually leaving COVID-19 behind.The month of May was a good time to take the intercity from Bonn to Niebüll, then the local train to Dagebüll Mole and finally the ferry to the charming North Frisian island of Foehr.
The island is wonderful for riding your bicycle. After getting off the ferry I rode my Brompton from Wyk to Utersum on the other end of the island where I had booked my hotel. For one whole week I crisscrossed the network of bicycle lanes with my folding bike.
Bumpy Bicycle paths and the tree root intrusion issue
Some bicycle paths are in a bad condition because they are really bumpy. Instead of rebuilding these paths, the islanders have simply put up road signs warning of dangerous tree root protrusion. Since some bicycle lanes run parallell to the nicely blacktopped smooth country road, I took the road instead of the bicycle lane. Checking the internet for the issue of tree root protrusions, I found that even the parliament of Schleswig Holstein had discussed it.
A Stop in Husum on my way back home I made a stop in the small Nort Frisian city of Husum where fresh seafood sandwiches are sold in the pittoresque port. 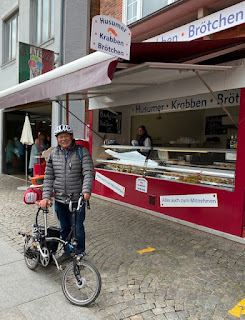 And finally, after riding Deutsche Bahn, I cannot let you go without a picture which illustrates a detail of the deplorable service which this train company has become notorious for. 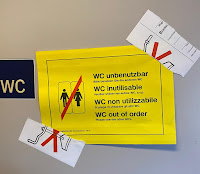 In case of a lockdown, 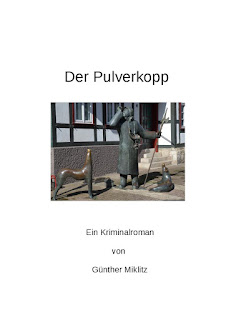 Der Pulverkopp im Verlag Books on Demand
Posted by G.Mik at 11:38 AM No comments: 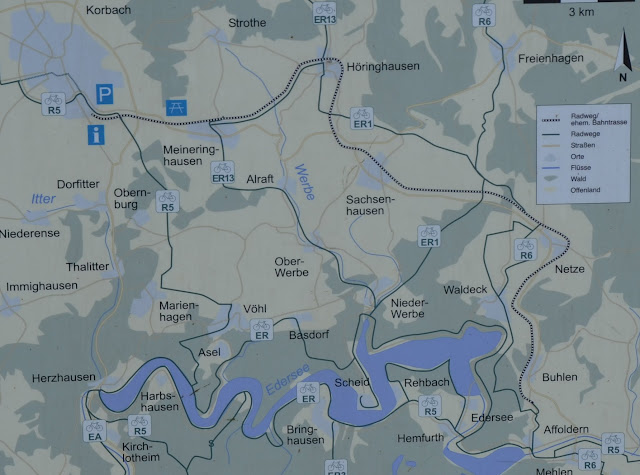 The Korbach - Buhlen rail trail deserves the praise it has received since it was opened in 2013.  We greatly enjoyed our ride on the trail. For good detailed information on the trail I recommend this
web-site by Karl and Alexander Schlemmer:
Edersee Bahntrassenradweg

But now back to the issue of wind turbines.  When we were north of  Korbach we saw many wind turbines scattered over a formerly beautiful mountain landscape.
In the village of  Massenhausen which is a suburb of  the former residence city of the Prince of Waldeck, we saw a wind turbine scratching the village border and annoying the people who live there.
In the city of Korbach,  we met even active protest. Members of a citizens protest group proudly presented their banner against the dislocation of wind turbines in their home town: 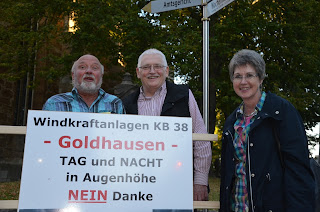 From a bicycle tourist point of view, wind turbines are spoiling the view of a beautiful landscape.
But our protesters had a stronger argument.  In their opinion, energy from wind turbines does not pay.
Economically it makes sense only when government regulations guarantee subsidies that are financed by all energy consumers.
We realize that this grass roots protest in Korbach as well as many others in the country are the result of a national  energy plan which was adopted in Berlin when the nuclear plant catastrophy in Fukushima, Japan, shocked the world.
Germany decided to gradually close down all her nucler power plants.  The resulting energy loss is to be compensated by electricity generated in numerous wind parks and by solar panels on many roofs. Corresponding investments have been huge. It seems that we can live with the new sight of roofs with solar panels but not so much with gigantic wind turbines milling in residential areas and over beautiful mountain landscapes.
Posted by G.Mik at 11:01 PM No comments:

On the Lahntal Bicycle Trail from Dietz to Lahnstein

From Diez to Lahnstein: 50 km.   The train goes once per hour. Good to know for the return trip. Road forbidden for any vehicle - ... 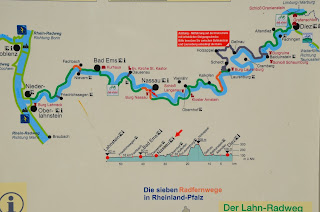